Share on facebook
Share on google
Share on twitter
Share on linkedin
> Growth > Moving You
By focusing on moving you from where you are to where you want to be will not only change your current circumstances but change all aspects of your life and the lives of those around you. 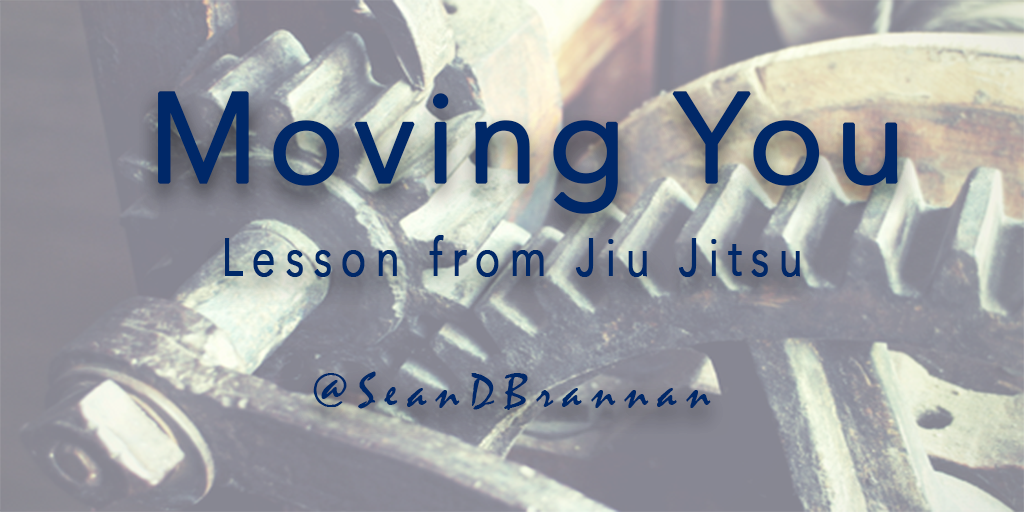 This morning I took a beginner Jiu Jitsu class at a local gym. When I arrived, there was one other guy, a fire fighter, that was also brand new to the sport. The instructor asked us about our backgrounds and if we had any experience wrestling or fighting. The fire fighter was a high school wrestler and I told him that I served in the US Marine Corp and Army and had some training, though every move we were taught in the military was suppose to end in the opponent’s death.

He laughed a bit and said that we would both probably struggle with the concept Jiu Jitsu is based on, don’t move the other guy, move you!

It made sense during the moves we were practicing, and believe me they were very basic beginner moves  (but they still wore me out). Yet he was right, I found myself many times trying to move my opponent instead of moving myself and then wanting to ‘redo’ the move until I got that simple and obvious concept down.

If you think about it, that is what we are taught though; it’s not us it’s them; we have to over power our opponent; we have to change (of ‘fix’) them. Even the popular saying that tells us to remove negative from your life to allow more positive into your life suggests you moving someone or something else, but even that only really works if you first move you in a different direction.

What I’m really trying to say is that everything comes down to you; what you believe, what you speak, what you do! Now that may sound selfish to some of you, but let me explain… It is impossible to give something that you do not have…

If you focus on growing yourself, everyone around you will grow as well. Your inward self has to change before your outward circumstances will begin to change.

Much like the lesson I learned this morning at my very first Jiu Jitsu class, don’t focus on what’s holding you down, focus on moving yourself out from under it.

Start working on changing yourself for the better and not only will your circumstances change for the better, but everyone around you will become better as well!

Remember, you can’t give what you don’t have, so focus on growing yourself first!

Stay Connected with My Newsletter